A Walk Through History. 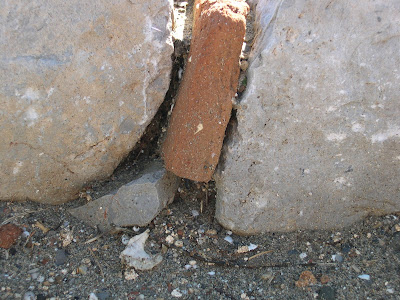 Geoff and I went for a walk along one of our favourite beaches a few days ago and decided to go and look at an archaeological dig that has been worked on over the last couple of summers. As is the norm in Greece, the site, which is full of fragments and still being worked upon, is not protected.

An archaeologist from Philadelphia University and her students come over each summer to dig.

It may be the remains of a port which was used by the inhabitants of a Minoan settlement nearby. But, it is unlikely that we shall ever find out because the area in which the archaeologist believes the remains of the palace are to be found, are under the local football pitch. 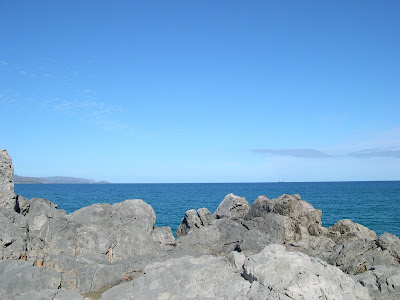 The area is scattered with pieces of terracotta pots. 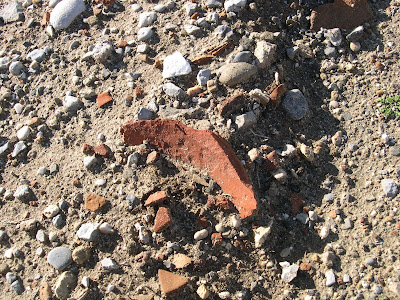 These remains more than likely date from about 1700 BC. 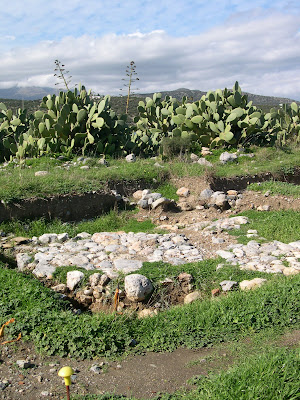 There is even this small area of road. 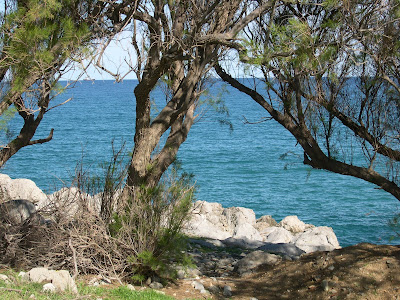 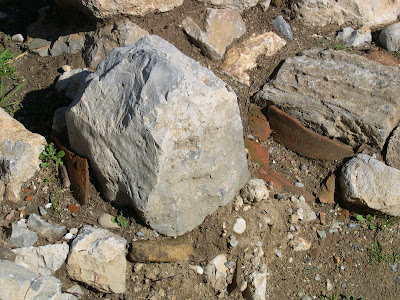 We both find it humbling and thought provoking to hold ceramics that were last used over 3700 years ago. Please note, we did not remove anything from the area. 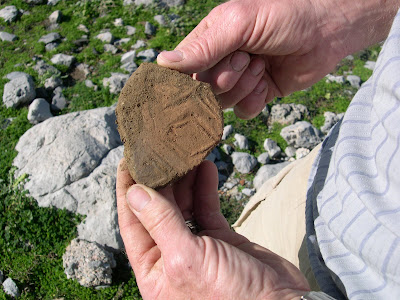 The Minoans were the first great civilization in the Mediterranean, they were cultured, peaceful people. They expanded their empire from Crete through trade rather than force.
There is much conjecture to what happened to them. Some say, the eruption on the island of Santorini contributed to the downfall. But current thinking suggests that it was waves of invaders from the north (Greece) such as the Mycaeneans and Dorians who assimilated their culture. In an effort to preserve their way of life, thousands of Minoans retreated to mountaintop sanctuaries and held out for several hundred years. 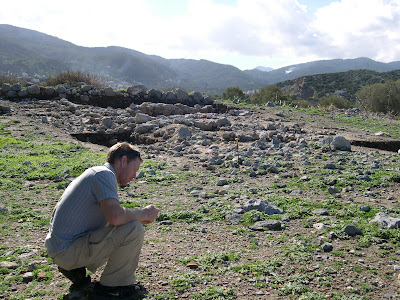 I always have trouble getting Geoff to come home, he could stay for hours searching through all the artifacts.
As a potter myself, I can appreciate the workmanship and makes me wonder whether fragments of my pots will still be around in 3000 years time.... 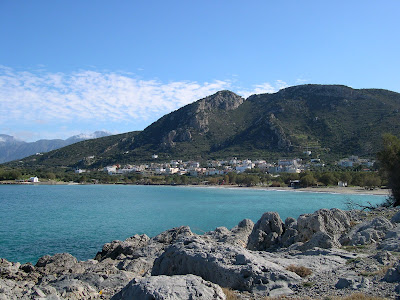 In the background is Istron which is, by comparison, a popular holiday resort.

the colours of the stones are gorgeous. what a really lovely place to live. hugs.

It is facinating that stuff is just laying around. Lucky you to be able to look at all this all alone.

I think it is so special to handle pieces of pottery...like touching shadows and memories. You live in a rare and beautiful place.

Thanks for taking us on this dig...
Wow. My DH would drool over these finds. I would enjoy it as well.
Wish I could fly over and do this walk with you! So beautiful there.

What a beautiful place to live! The rocks and stones are amazing and it is awesome you can visit the site, though sad that it is not protected. I love historical sites. Thanks for sharing.

How wonderful to live near this site. Very exciting. At one point i thought i wanted to be an archeologist. I love all the layers of life. The fragments and chips, shards and I love the bit of road. Thanks for sharing your adventure.

I am so jealous of you to have this on your door step. You are so lucky - a little bit of historical paradise.
x x x

That is so cool, Jude. I love archeaology and feel so connected when I get around such very old, very personal things. I would be like Geoff, I could stay all day.

It's mind boggling that ancient pieces like these are just lying about there. It must be so incredible to walk there and wonder at the hands that shaped those pots! Thanks for showing us this place.

Btw, I found Birds, Beasts and Relatives by Gerald Durrell at a used bookstore yesterday and immediately bought it! I've read it many times when I was young, and am looking forward to reading it again very slowly. :) Most of it is set in Greece (Corfu), and I'll be thinking of you!

wow - I studied archaeology in college and only gave it up when I realized I probably couldn't make any money at it! But to this day am facinated by sites - and would have spent all day on that beach looking for pieces of pots and other artifacts. Good that you didn't remove anything!

'Touching shadows and memories' yes, that's how I feel. When I pick up these pieces I'd love to know who made them , who used them. Thank you everybody,it's really encouraging to receive such interested comments.

Gorgeous photos, a contrast to our snowy environment today here in Wales.

How exciting being able to view these digs and handle the ancient stones, actually touch history - Wow!

Ohhh! That's given me a touch of the green-eyed monster! Like, cait, I'm snowbound in Wales and I'd love to be on a beach in Crete. Thanks for sharing it!

Beautiful photos, bringing back memories of our one visit to Crete.

Wonderful - I'd be there late with Geoff too. Such beautiful pictures too. If I ever break a pot, it gets thrown into the flowerbeds at home and put back into the earth, the same with pots that don't make it up at my workshop(rather a lot of them at the moment!). Pottery is such an invaluable commodity for archaeologists. I've got lots and lots of shards, I sometimes find them more fascinating than complete pots as the eye is focussed onto a small area. Thank you, lovely post. I was at Wenford again the other day - it's a bit of a state these days, when were you there? I'd be interested to hear more about your time there.

What a gorgeous place.
I can well understand the attraction of the dig and the reluctance to leave it and go home. It's hard to imagine such antiquity, just open to the elements, but I guess there's a wealth of such sites nearby and you're accustomed to saying 1700BC in realtionship to your neighbourhood.

Oh how wonderful. Thank you. I always feel gratitude for a bit of your life on the blog!

Oh! Look at that jeweled tone blue water! I am near the water too and this has brought me straight back to those blue water days. Oh thank you!

Hi Jude, beautiful rocky contrasts! Just wanted to let you know that the photo tag has been posted at Oasis.

my thank you as well. i appreciate that you put the site, and the remnants into historical context.

I love visiting places like this. I could sit at these sites for an entire day. It's always special when you have the site to yourselves. Lovely pictures...thanks for sharing!

I love the photos (that dear little iris in the grass) and also your knitting; I think yarns matched to places tell their own story. Thanks for following my blog, too - you are on my own blog-list now. Ann.

I'm really quite envious! fancy being able to walk through the dig site, exploring and picking up shards.As you say, very humbling to think the pottery goes back 3700 years.