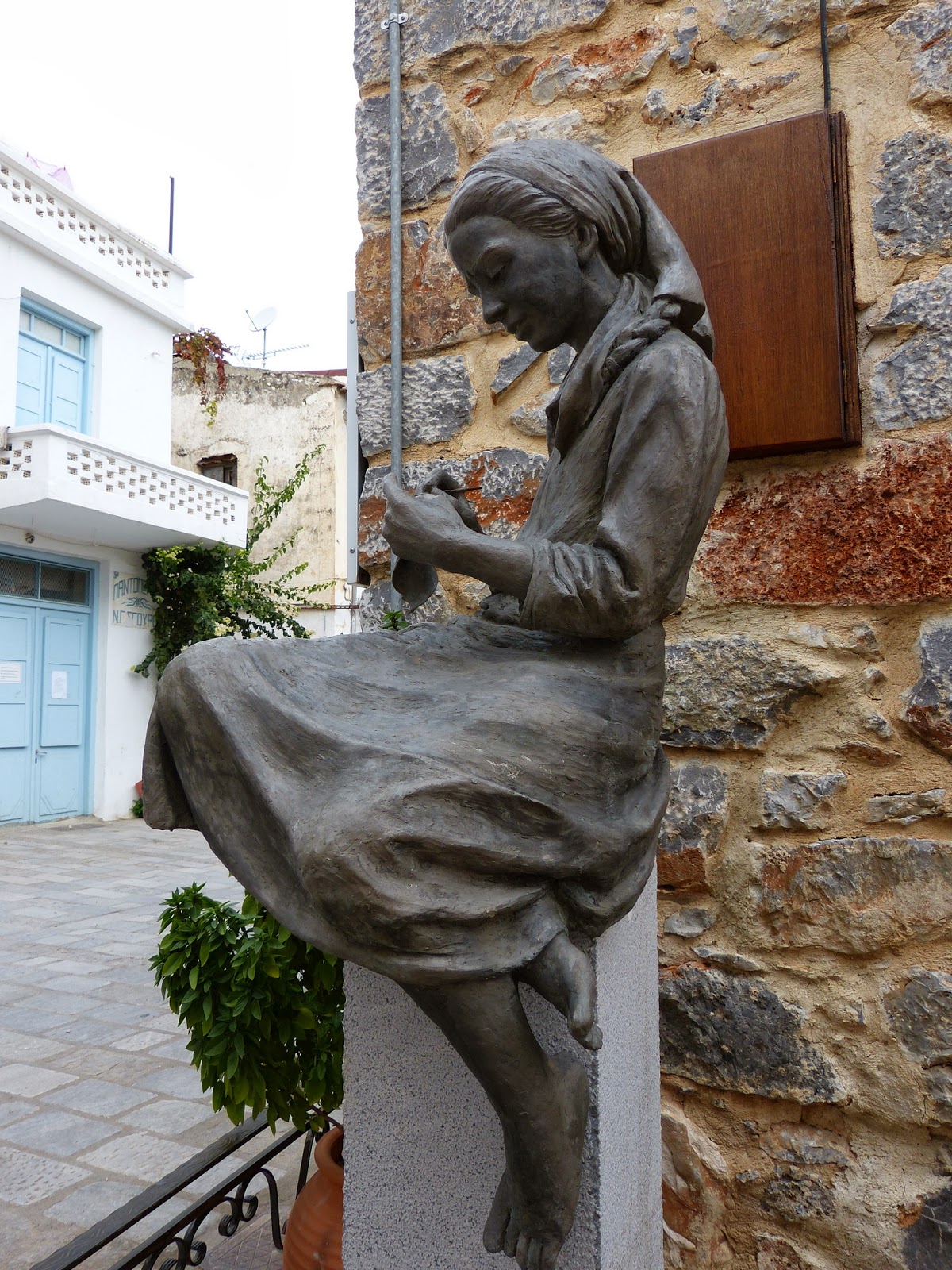 In the near-by village of Kritsa, there are several beautiful sculptures depicting the short life of a young girl in the 19th century. Her name was Rodanthe, the daughter of the chief priest of the village.
One morning, aged 17, she was singing whilst working at her loom, the door was open. 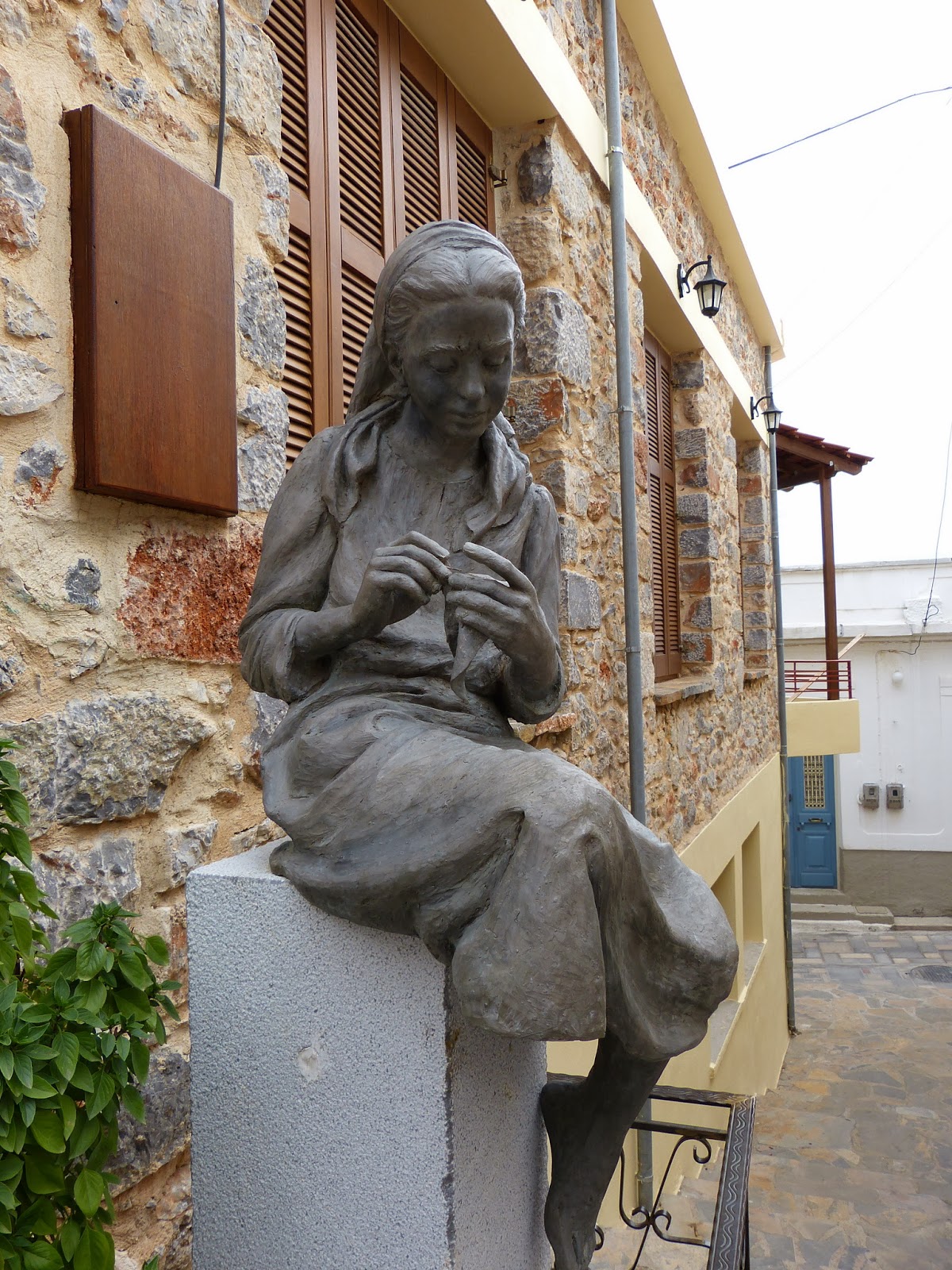 The local Aga was passing through the village with his men and fell in love with the beauty of her singing.
He vowed to marry her.
That night he sent his henchmen back to the village, her mother was murdered and Rodanthe was kidnapped.. 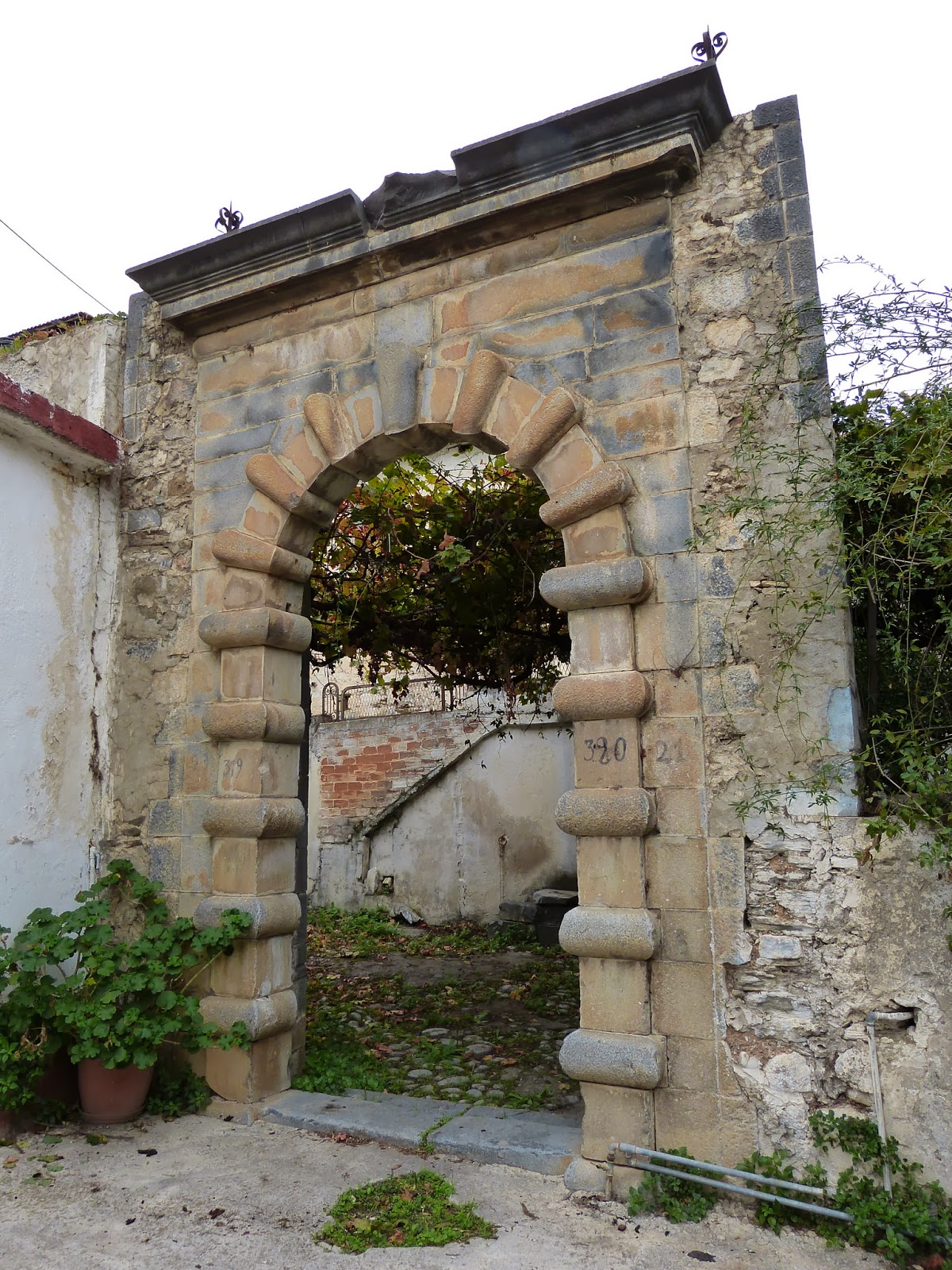 She was taken to the Aga's house in Houmeriako where the wedding preparations were quickly arranged.
Later when alone in the house with him, Rodanthe tricks him into discarding his weapons and clothes and wait for her in the marital bed..
She snatches his sword and stabs him to death, then dresses in his clothes and fled to the mountains. 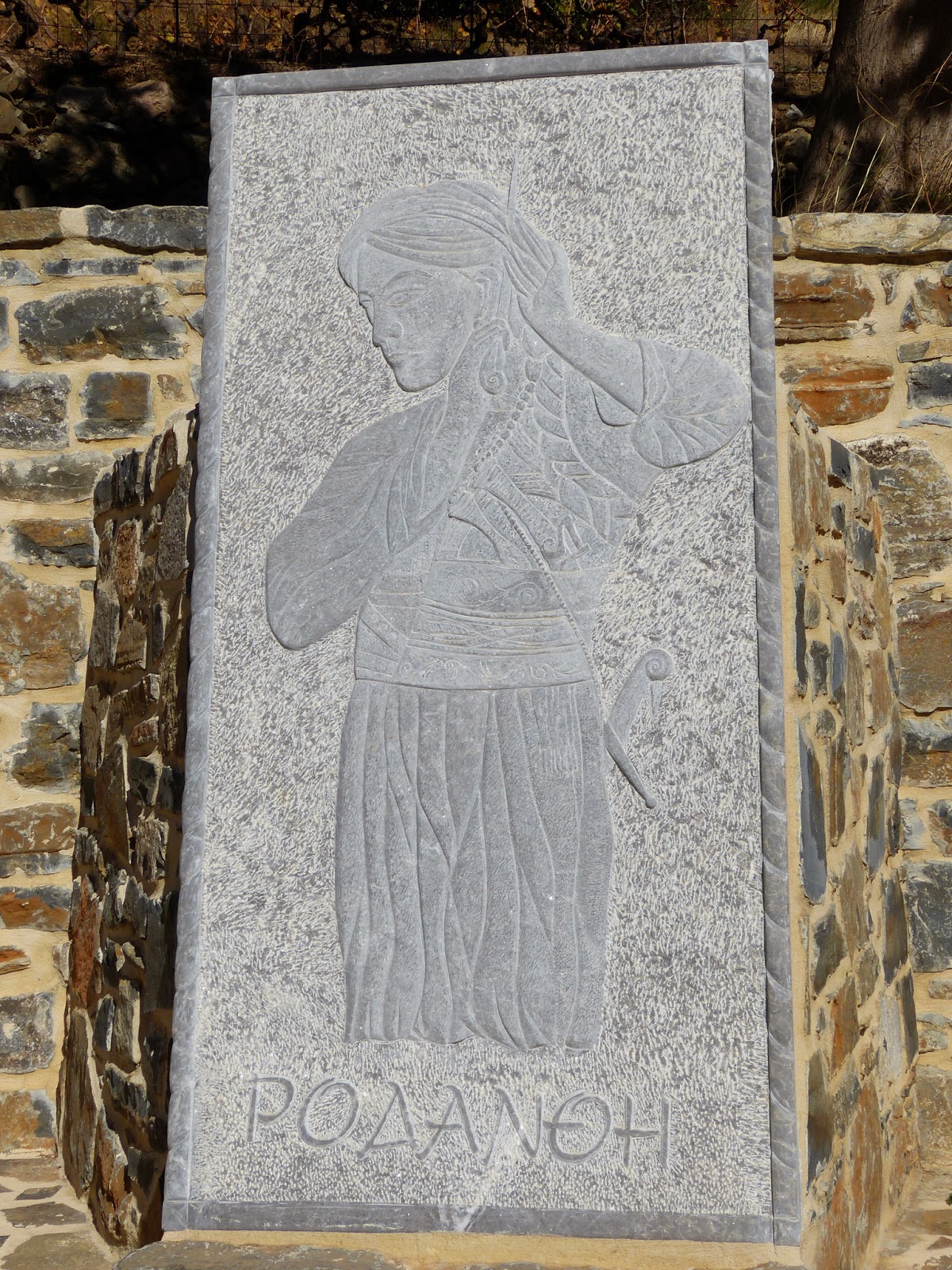 Desperate, finding herself in the tiny church in the hamlet of Zenia, Rodanthe cuts off her hair and dedicates
it to the Virgin Mary.
Dressed as a man, she joins the Cretan rebels, who called her (him) The Beardless Manolis.
(He) proved to be the fiercest fighter in the group.
January 1823, there was a 2 day battle on the outskirts of Kritsa where the Cretan fighters were trying to hold back a much larger Turkish army.
Rodanthe fought bravely, she found and killed the Turk who had slaughtered her mother. But was gravely wounded and taken to the doctor in Kritsa. 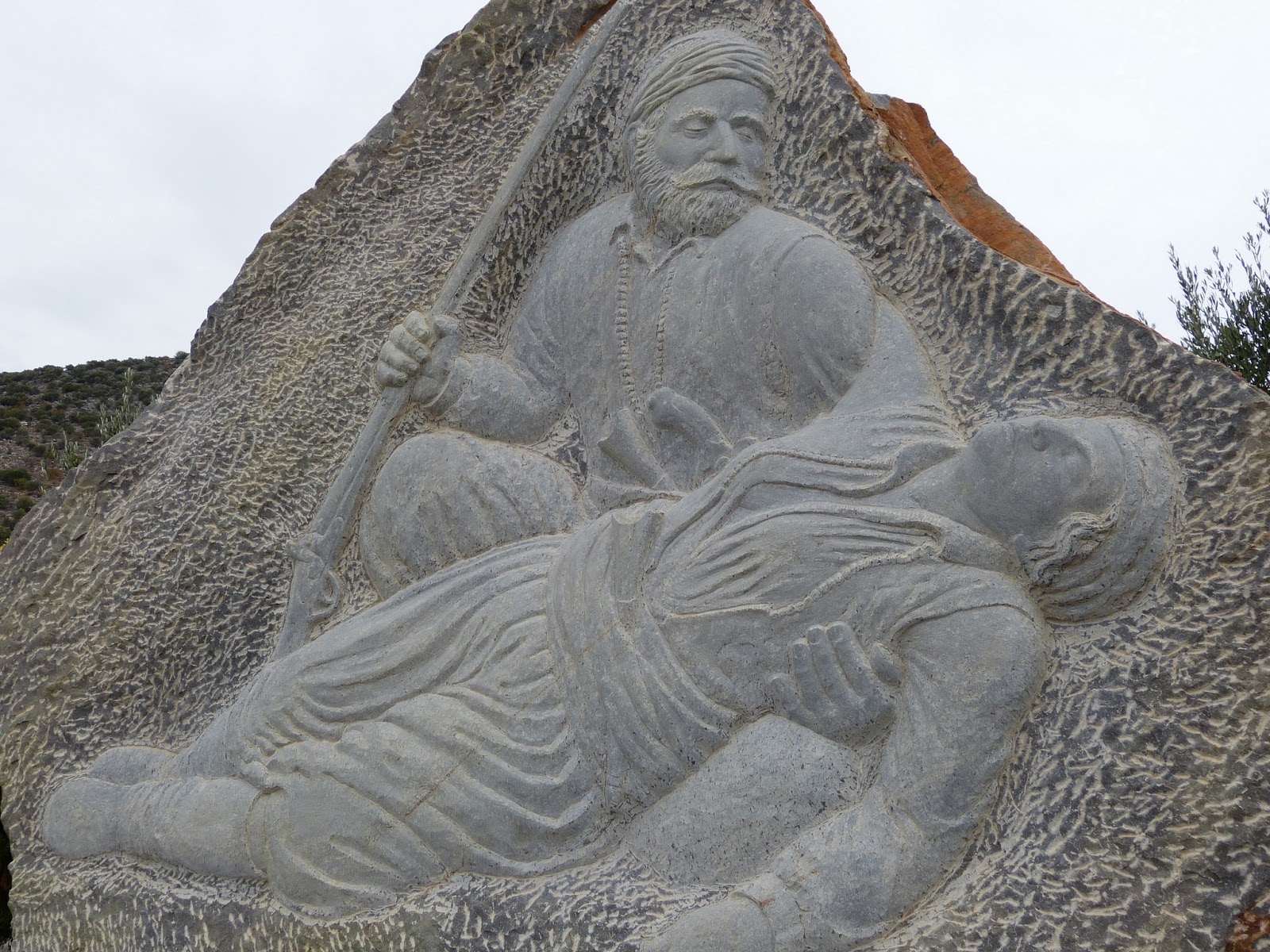 By coincidence, her father, had also been wounded and was being treated by the same doctor.
When the doctor came to cut away her shirt, the truth was discovered and Rodanthe managed, with her dying breath to explain to her father what had happened and that she was still 'pure'.
Both her and her father died of their wounds and were honoured by the folk of Kritsa. 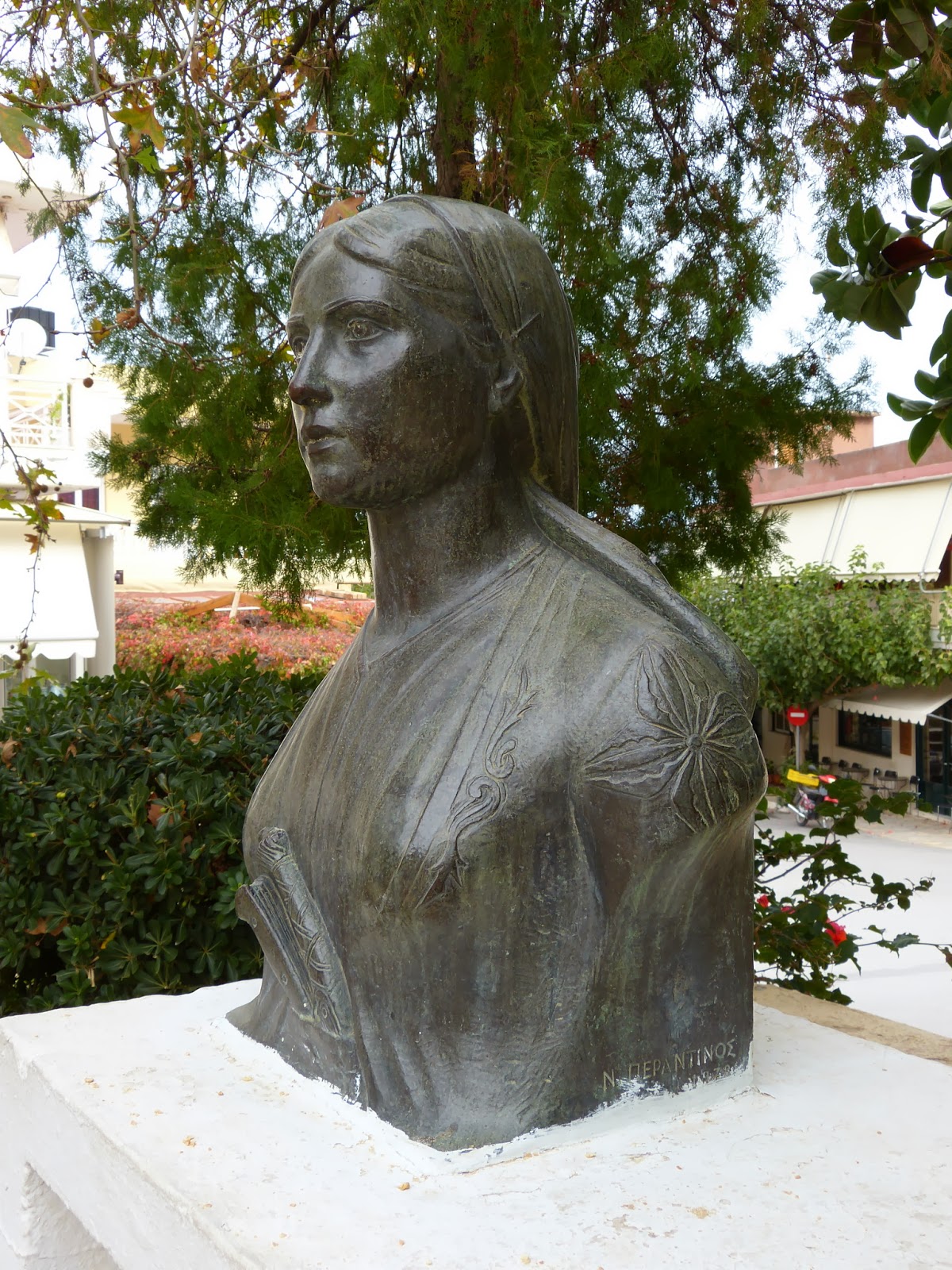 There are many plaques and statues in and around Kritsa in memory of this brave girl.
Descendants of her family are planning a book and converting the family house into a museum. 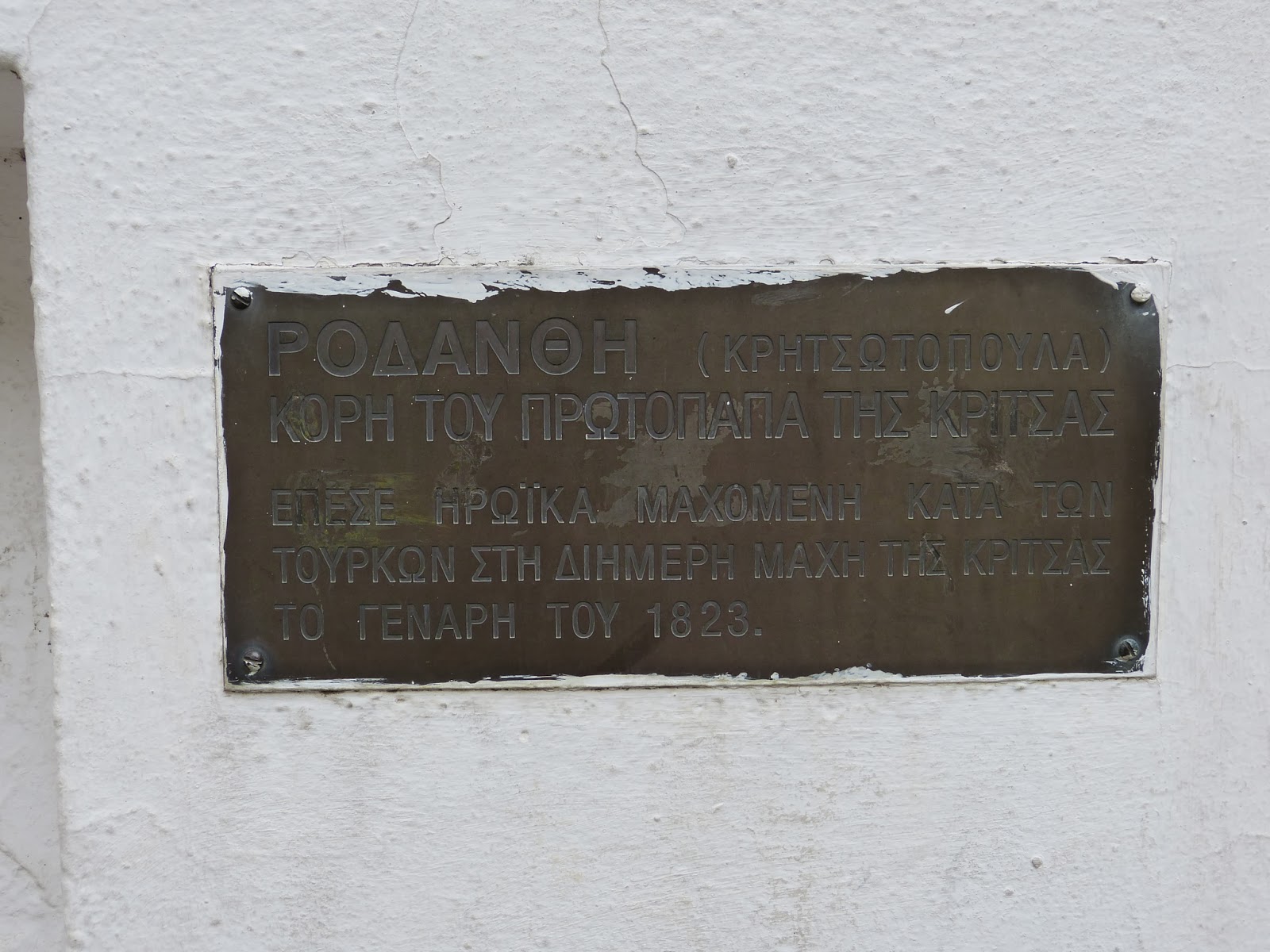 The first sculpture of this post are of no paticular girl, they portray how young girls of Rodanthe's time would have spent their time.
A friend of ours, Nigel Ratcliffe  is the sculptor and kindly gave me permission to use these images. He also carved the engraving of the dying Rodanthe and her father,
Posted by Jude at 17:10 7 comments: