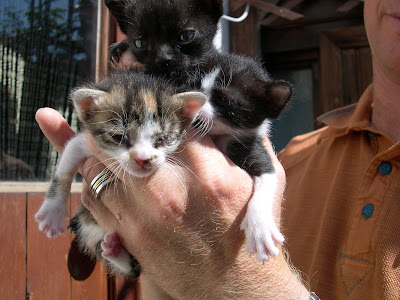 Went to a meeting at Virginia's last night, she's a wonderful woman who started a charity to help the stray cats in our area.
You've already seen some, the 3 above were saved by Bethan in April when an old lady threw them in a culvert. 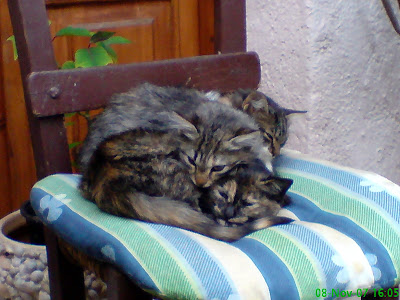 The 3 above were rescued and then adopted by Julie.
Virginia tries, with her band of helpers to capture females and have them neutered, she also organises adoptions so some of them leave Crete and find homes in Europe. Remember, these are street cats originally, scavenging from bins. I've seen some dreadful sights when they've been in fights and are scarred. 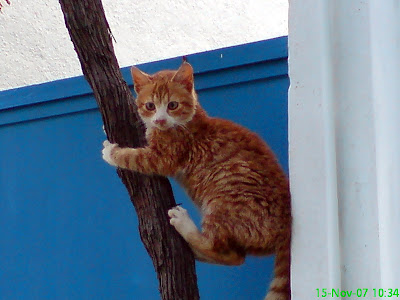 But, sadly, Virginia is running out of help and funds, even though she has monthly bazaars and everyone are volunteers. She is hoping to open a charity shop but will be reliant on volunteers. 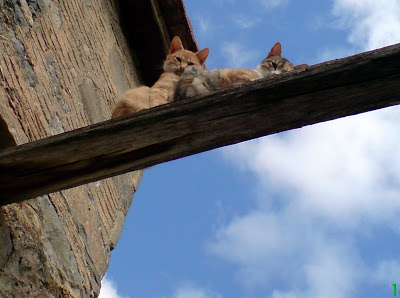 Anyway, I'll keep you informed on how she does but at the moment it seems she is desperately in need of many more helpers.

omg i hate when this happens...although i am not a cat person, i feel this way about dogs...people give their kids a puppy or kitten for 'xmas' and then they realise they have to look after it and don't want it!!!

It's a great initiative! Do they spay/neuter the cats before adoption? I wish vets would volunteer a little of their time to doing this ... it would help stem the flow at the source. Great photos - esply the last one!

OHHHHHHHHHHHHHHHH was the first automatic spontanious sound out of me upon seeing these kitties. Such lovely photos you have of them.
I am a cat owner and it makes me sad to see the "waste" of the throw away cats. I know this is everywhere. We got our cat from an animal shelter and yes, it was neutered before adoption. However we paid for that and all it's shots too. We love Henry V and he is a huge and regal Tabby.

Oh its so sad sometimes to see cats and kittens in a terrible state in Greece. Thos kittens are so sweet.Good on her for helping to reduce the numbers (Although personally I can't have too many cats around me!)
Anyway I've tagged you now.

of curse we are gonna be blogging buddies when my little sweet pea enters this world, end of january. thanks for your visits, we are definitely new friends!

Oh how sweet!Love the name of the boat, Cariad Mawr Carol

Oh they are so adorable. I wish her luck in her venture. So so many stray cats in this world.

Many of the vets in our area will volunteer their time for the local animal adoption shelters.