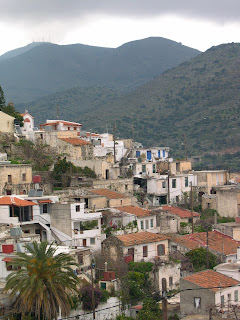 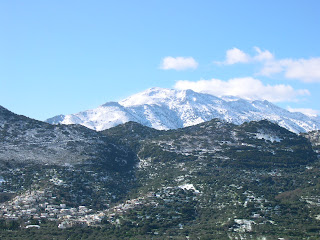 Houmeriakos is where we have two houses, one is nearly renovated and the other has come to a halt. The village is 3km from Neapoli. It was occupied by the Venetians and Turks. In 2001 it had a population of 273 but I think there are alot less now. They are a very friendly bunch and we have a taverna which is popular and a cafeneio which is used by mainly local men.. we will go there soon! There are approximately 10 Brits. here at the moment.
Posted by Jude at 14:47

Thanks for your kind comments on my blog - I am stunned by the photos on yours! I bet it is a bit warmer there than here ...

My C&G took 4 years, 1 evening a week + homework, but I took it at a local college. If you do it by distance learning the time scale is more flexible!

which covers both Embroidery and P&Q.

hi jude, how are the quilts coming on? I've got a book out of the library with loads of ideas for quilting, dyeing, stitching etc. Might order it from A mazon. May be off to the quilt show at Harrogate with connie and her quilting group next week. Off to the quilting shop in Southport on Friday.Any NEWS?

Hi Found your blog at last. Very professional and well done. Looking forward to the next hot stones day followed by lunch of course.

Keep up the good work with the quilts which look amazing. Bye for now J