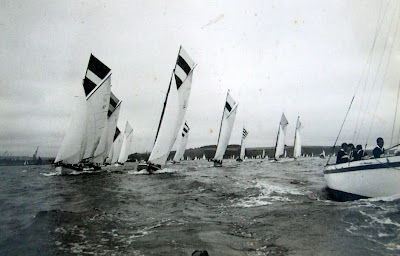 It seemed that several of my blogging friends were heading down to Cornwall over the Easter holidays. I felt... homesick... and I spent a while remembering happy times while I lived there.
We are still ploughing through boxes and boxes of our belongings which were in storage for a few years while we were sailing here but during the weekend I found this collage of photos of the Falmouth Working boats.They are rather grubby and a little torn around the edges but the memories are still intact.... 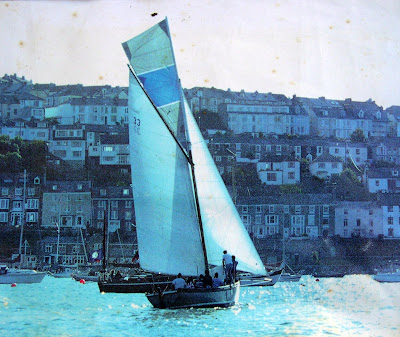 I spent several summer seasons crewing on these wonderful traditional boats and had many friends who enjoyed it with me. If you are local you may recognise some faces, slightly older now as these photos were taken the the mid 1990's.

In fact, that's me, above, with Robin and Howard. Julian is on watch above.
We crewed "Agnes" who was one of the younger boats, some were nearly 100 years old. Some owners would not allow women on board, bad luck. The working boats belonged to a small fleet of oyster dredgers and Agnes had spent some of her life actually doing that. Some boats are built these days just to race. None of them race with engines so it's all the power of the wind and stratagy by the boss.

What terrific photographs. Sailing ships are so beautiful to look at, whatever their age.

oh wow, i love cornwall. my hubby was a devon product.

I helped crew the Cousin Jack once Jude! Lovely to see 'home' on your blog. Grotty weather ths week if that helps? x

Oh! This is marvelous! Your photos and dialog captured the event wonderfully. I could imagine myself there. That must have been so exciting. We don't have much of that here in the states, well maybe some in New England. Mostly the "America's Cup" races, which are so fun to watch. Good post!

you've given up a lot to come here.

i dont get homesick for new zealand, but then agaqin, i was 25 when i left, so i only have nice memories these days!

Oh lovely, I shall miss our annual Cornish holiday this year - but look forward to Crete instead!

They are lovely boats Jude. It's nice to know they are still being used too.
There is a smaller version of these boats called a 'Jumbo' which is unique to St Ives. Unfortunately there are no originals left but a replica is being built at the moment to original plans. I'm really looking forward to seeing it.

What fabulous pics, Jude. Although I am not a sailing person, I loved the many holidays we spent in Fowey when our boys were small (early 1960s)- and the Scilly Isles. Thanks for sharing your memories.

Cornwall is hot, hot, hot at the moment. Lovely pictures Jude. Wish I had your boating pedigree. But it's coming...

Beautiful boats jude, lucky you to have sailed them.

Great photos and interesting to read of your sailing experiences. We stayed at Fowey when we brought our old wooden boat round from Portsmouth to Fishguard - we ended up near the china clay works but I was so tired I went out like a light.

Wow, amazing photos! We spent an afternoon in Falmouth when we were over in Britain. I'm feeling homesick myself. (though I was born in South Africa my ancestors come from Devon and I really do feel homesick)

Sounds and looks like it was great fun. No good for me though,boat and sea always ends up with me heave-hoing overboard........

These are amazing photos... Came across them looking for old photos of working boat Victory...