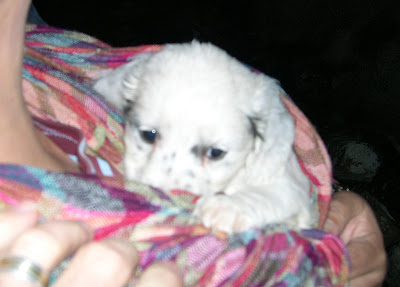 We deliberated, hummed, harred, slept on it, then ignored every problem we could forsee.
So, on St David's Day, we picked up the smallest member of our little family.
His name is Dewi. For those who don't have any knowledge of Welsh, Dewi Sant is the patron saint of Wales, he was a monk and lived around 500BC. Now, the other thing is, pronunciation...it's not Dewi as in "dewdrops", it's De.....wi as in De ...von and De...vil, ok? 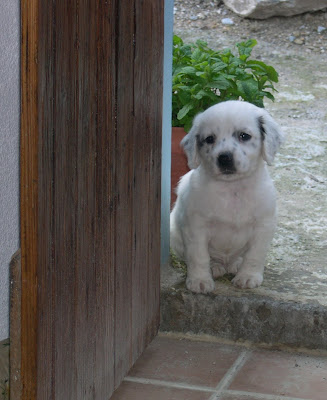 He's a sweety, with such a sad expression on his face which is at odds with his true nature. He's into everything and scampers around, getting under our feet most of the time. 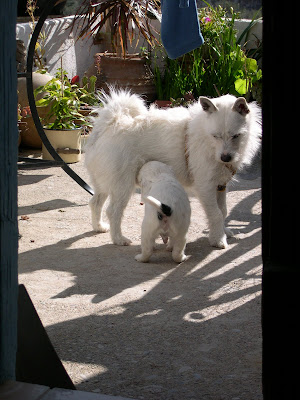 He's still rather confused..... and Jose is in shock.
But being the elder of the pack Jose is showing him patience and fun.
We know he's part Springer Spaniel and his mother is long and low, so watch this space.... 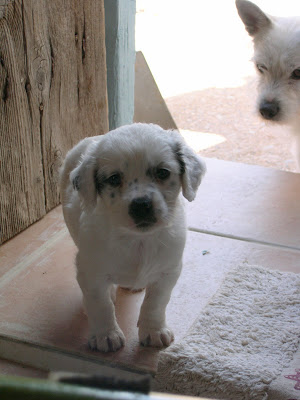 Ok, the Greek word for small dog, puppy, is skilatchi

Well, it's certainly easy to see why he was so irresistible. :-)

Oh he is so cute, or as they say here Mignon.

oh jude (beatles) heis soooo very cute...is he going to join us on 'dogs on thursdays'? am looking for ward to lotsa fun photos.

What a charmer! Thank you for the pronunciation key. Looking forward to seeing your new arrival's development.

That is the sweetest puppy I have ever seen! He even looks like he has freckles! I want to hug him...

You are going to have such fun with Dewi - he looks distinctly mischevious, as if butter wouldn't melt in his mouth (not quite the right metaphor for a dog). Look forward to hearing what he gets up to.

That face......what a scamp.
I'll be watching to see how he grows. I hope you've hidden your shoes and all other chewables!

Well, he's just adorable and looks like a bundle of fun. He'll keep you all busy for a while!

What a sweetie he is. Love the freckles on his face. How many other dogs do you have? It will be fun seeing him grow and blossom.

Oh he's so sweet - I can see why you just had to take him home with you. I would have done the same - and I'm more of a cat person!!!

I love your other posts too - I make lemon curd with organic ingrediants - but it never turns out so sunny yellow as yours has. Fabby!

Ohhhh! How cute cute cute!
I was wondering...are you busy on Saturday morning....?
Contact me...
Leonie x

Dewi is sooo cute. He reminds me of our Jack when he was little.

Want one! Want One! He's gorgeous, Jude. What a sweetie :)
Linz

Llongyfarciadau on your new arrival! And thank you for your good wishes - apologies for being brief tonight, I'm pooped!

I can't believe how adorable he is! So, so cute! Congratulations and enjoy! He's a very lucky puppy.

He is sooooooo adorable!!!! Today is all about dog news around here. Our neighbors got a new one yesterday, my niece was pondering adopting one today and sadly my sister in law informed us today her dog went to the er yesterday and is critical. Hope to see this little thing on Dogs On Thursdays!

Jude the picturs don't do him justice, he's much more lovely in really life. Ever so cute.

OMG, is he cute or is he cute! I just want to reach out and cuddle him.

Oh how sweet! Look forward to meeting him in July!

I am so envious!! He's ADORABLE !! Please keep posting more pictures of him.